"The knowledge of words is the gate of scholarship."
- John Wilson 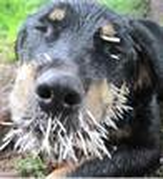 To chase something means to run after it and to try and catch it.  People chase other people and animals.  Animals chase people and other animals.  You can even use the word 'chase' when describing the process of working toward goals or working toward another object.  For example:  Keep chasing your goals by achieving Honor Roll each term.

Some of you mentioned that you didn't know what a porcupine is.  A porcupine is a small animal that protects itself with the quills in its skin that can be released to hurt the person or animal chasing them (the quills are like many small knives or swords that poke and cut the person or animal that is chasing the porcupine). This is why Ms. Dee wrote that you should never chase a porcupine!  Porcupines don't bother others, but if a dog or a person is chasing a porcupine, it will release its quills to attack!  OUCH!!!