"The scientist is not a person who gives the right answers, he (she) is one who asks the right questions."
- Claude Levi Strauss

What is a Blue Moon? 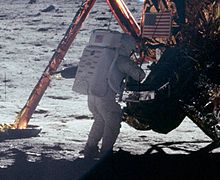 A blue moon is a rare event.  After tonight (August 31st 2012) our earth won't see another blue moon until July 2015.  A full moon cycle takes 29.5 (basically 30) days and normally there is only one full moon in a month.  Because some months have 31 days, every few years there is a special occurrence where more than one full moon appears within the same month.  When this happens, the second full moon is called a 'blue moon'.  It really isn't blue at all, just its normal color!

Neil Armstrong was the first person on earth to walk on the moon.  He was a U.S. astronuat and was the commander of the Apollo 11 crew that first landed on the moon and Neil Armstrong was the first to take a moonwalk.  This experience was televised throughout the world and Neil described the experience as his voice was fed to T.V. stations all over the world from NASA (the U.S. space agency).  Neil included everyone on earth watching and listening to this experience with him by saying "That's one small step for man, one giant leap for mankind".

Neil Armstrong lived a life of service as a test pilot, an astronaut, a farmer, and as a Boy Scout Leader.  Ironically, he passed away on August 25, 2012 (just a few days ago) and his private memorial service was today.  Since blue moons are so rare, it is pretty amazing that his death occurred near the time when a blue moon would be appearing.  His family has asked that if we want to honor Neil Armstrong that we should go outside tonight, look at the blue moon and wink in honor of Neil Armstrong and his life.  Let's all honor this American hero with a wink at the moon tonight!